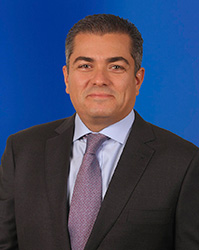 “Saad’s knowledge of Zurich and our people, his proven ability to foster valuable relationships with customers and brokers, and his drive for innovation and execution will continue to position our important Canadian business to deliver top-tier performance,” said Savio. “I am pleased to welcome Saad to the North America Senior Team.”

Mered joined Zurich in 2008 as CEO for Zurich Middle East where he developed and led an accelerated growth strategy across six countries.  In 2010, he was appointed CEO General Insurance for the Middle East and Africa. He became Chief Claims Officer for the Zurich Group in 2014 and has been a driving force for modernizing and reimagining the global Claims function while helping to raise customer service levels. Mered started his professional career in 1994 at AIG, where he held various positions during his tenure with the company.

Mered will be assuming the Chief Agent role from David Levinson, who will work together with Mered during the transition. Levinson will be returning to the United States to explore other opportunities at Zurich.

Mered holds a Juris Doctorate from Georgetown University and a Bachelor of Arts in Political Science from the University of California, Berkeley.

About Zurich
Zurich Insurance Group (Zurich) is a leading multi-line insurer that serves its customers in global and local markets. With about 53,000 employees, it provides a wide range of property and casualty, and life insurance products and services in more than 210 countries and territories. Zurich’s customers include individuals, small businesses, and mid-sized and large companies, as well as multinational corporations. The Group is headquartered in Zurich, Switzerland, where it was founded in 1872. The holding company, Zurich Insurance Group Ltd (ZURN), is listed on the SIX Swiss Exchange and has a level I American Depositary Receipt (ZURVY) program, which is traded over-the-counter on OTCQX. Further information about Zurich is available at www.zurich.com.

In North America, Zurich is a leading provider of insurance products and services, including workers’ compensation, liability, property, specialty and F&I (finance and insurance) for a number of major industries, such as Construction, Auto Dealers, and Technology. It offers life insurance and disability coverage in the United States. Zurich employs approximately 9,000 people in North America. It’s a top-four commercial insurer in the U.S. and has been insuring U.S. businesses for more than 100 years. Further information is available at www.zurichna.com.