Sustainability initiatives and building resilience emerged as the two main themes from Savio’s conversation with Reactions. 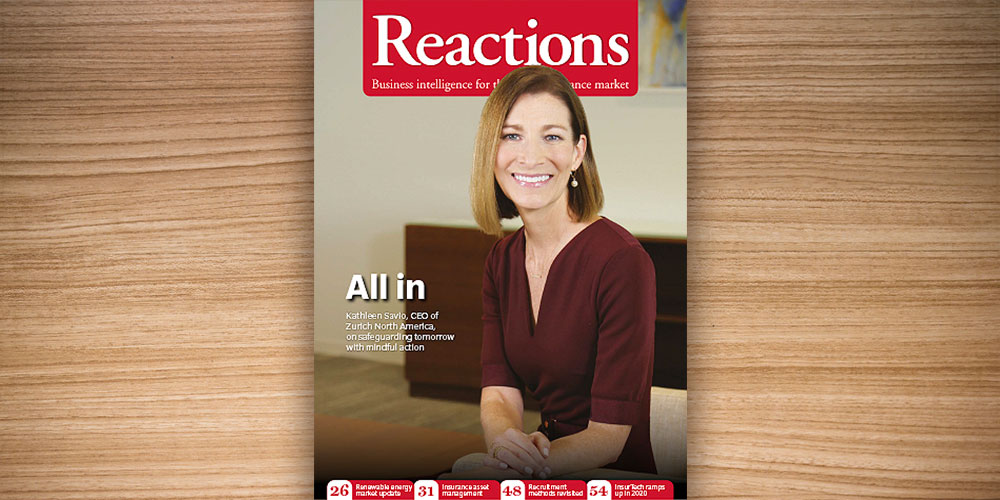 “When we think about sustainability at Zurich, we’re defining that as doing things today that will help safeguard tomorrow,” said Zurich North America CEO Kathleen Savio during an interview with Reactions Magazine Editor-in-Chief Shawn Moynihan for the March 2020 cover feature, “All in.”

“In terms of climate risk overall, I would say that we’d be using the phrase ‘all in,’” Savio said, adding that Zurich North America is making climate change and sustainability initiatives a top priority “as we work purposefully in what we do to further protect our climate for future generations.”

During the interview, Savio also addressed important topics, such as the current state of Zurich North America’s business and strategic initiatives, including strengthening its capabilities and presence among middle market customers and prospects.

Moynihan framed Zurich’s current state of its business, highlighting how in February 2020, Zurich Insurance Group posted a 16% rise in business operating profit for full-year 2019 to $5.3 billion, partly due to strong underwriting results within its Property & Casualty segment. Its North America operations were an important contributor to those results, delivering about 30% of the group’s 2019 business operating profit. The article also highlights important projects where Zurich is actively involved:

The conversation wrapped with a discussion about the future of work.

“We want Zurich to be a place that lets people be themselves. We want our people to feel heard, to feel value for the unique perspectives that they bring,” Savio said.

Non-subscribers to Reactions can read Savio’s cover feature when they sign up for a one-week free trial of the magazine at the following link:

Thank you to Reactions magazine for providing the free trial option.

Subscribers to Reactions can access the cover feature here.