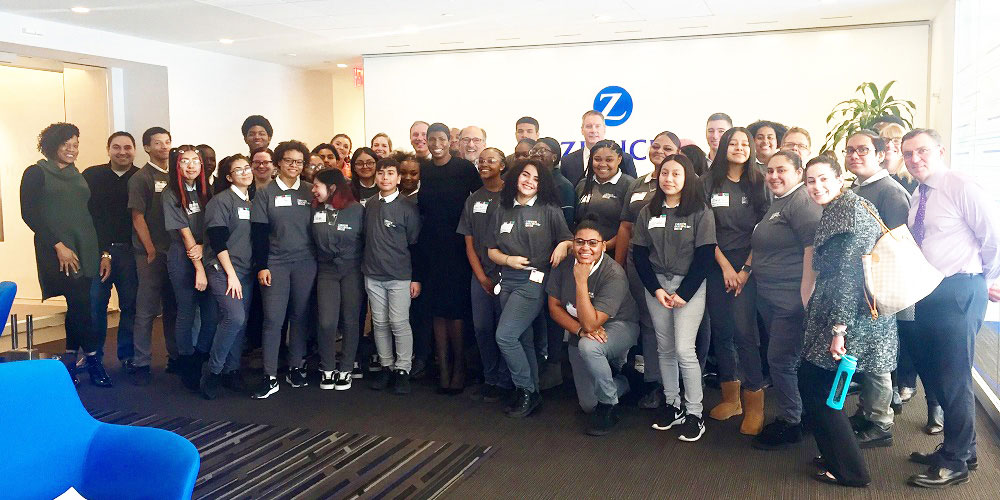 If the future of the insurance industry rests in the hands of today’s youth, then this week in New York City presented an excellent opportunity to start preparing them for that future.

More than two dozen students from the Laboratory School of Finance and Technology in the Bronx spent the day at the Zurich North America office in Manhattan on Wednesday to learn about careers in insurance.

They came to the Zurich office as part of New York City’s first Career Discovery Week, organized by the city’s Department of Education and the Partnership for New York City. More than 6,000 high school sophomores from approximately 140 schools took part in this opportunity to learn about the diverse and exciting job opportunities in the city’s corporate, financial and cultural sectors. More than 180 companies hosted students.

At Zurich, the students participated in a case study based on Superstorm Sandy to learn about the variety of roles involved in helping customers before, during and after a disaster. They also learned that the insurance industry offers a wide range of career opportunities for diverse interests.


‘Every day my job is different’

They heard from Zurich’s Risk Engineers, who visit high-rise buildings in New York City and businesses across the country to help make sure their employees are safe and that their businesses can continue to operate in the face of major storms, floods, fires and other hazards. 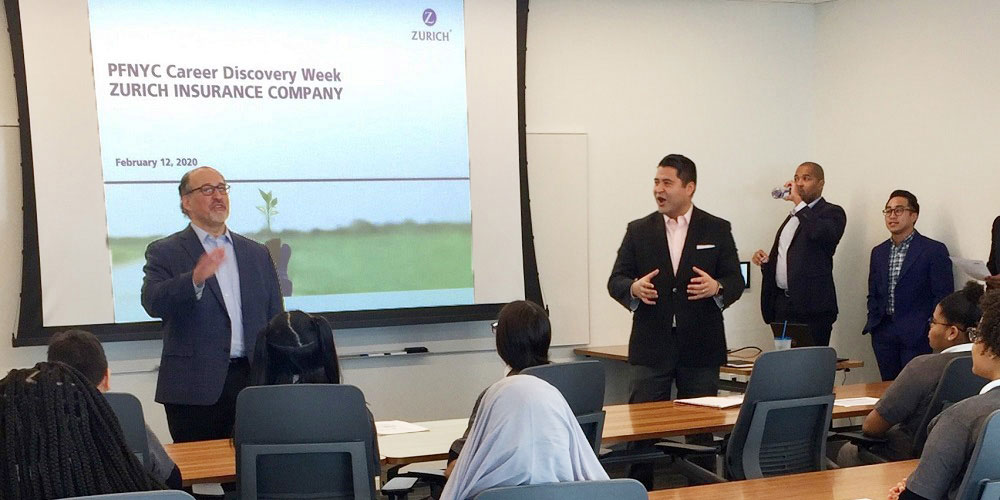 They learned how Communications professionals help support the business by talking to the media, insurance brokers and customers about how insurance can help individuals, businesses and communities.

And they learned about the vast opportunities within the Operations group at Zurich, where the possibilities are seemingly endless. “The great thing about Operations is every day my job is different,” Chavonne Hudson, Zurich’s U.S. Commercial Insurance Operations Leader, Surety and Trade Credit, told the students.

Many of the students seemed skeptical when they arrived at the Zurich office. But after learning about the possibilities within the insurance industry, some of them were more open to an insurance career.


Joselyn Cosme, who has career aspirations in the field of psychology, said she thought Zurich was a bank.

“I learned that it’s more than just money,” she said. “It’s more helping people and doing things to protect people and making sure they’re well-secured in life.”

Adriana Gonzalez, who hopes to be a criminal defense lawyer, said that before her visit to Zurich she only knew about health insurance. “After today, I realized it’s much more than that,” she said. “It’s a more broad concept: the interview parts, the problem solving, the risk engineering.”

John Diaz, Zurich’s Chief Operating Officer for Middle Markets, U.S. Commercial Insurance, helped kick off the program with Ron Davis, Global Head of Customer Management, Commercial Insurance. As a teenager, Diaz didn’t envision a career in insurance. “I wanted to play quarterback for the New York Jets,” he told the students. ‘We’re there for them’

Diaz finished college with a dual major in economics and psychology and, like many insurance professionals, discovered the opportunities in insurance after graduation. “To me, it’s really about helping the customer with the challenges they face day-in and day-out, to know that we’re there for them to support them when they need it,” Diaz said about his career.

Jimmy Kazlausky, a Risk Engineer from Zurich’s New York office, studied fire science in college with a focus on arson investigation. HIs educational background opened the door for him at Zurich.

Zurich is proud of its commitment to developing talent at all career levels, including by providing early career opportunities such as earn-while-you-learn apprenticeships, said Jessica Aguilar, Head of Talent Acquisition for Zurich North America.

“We were thrilled to host local students and share what makes the insurance industry an exciting place to build a career as part of Career Discovery Week,” she said.