When to initiate a roof snow removal plan

Removing snow from a roof is an expensive, potentially dangerous undertaking. It’s essential to evaluate available systems against your specific needs. 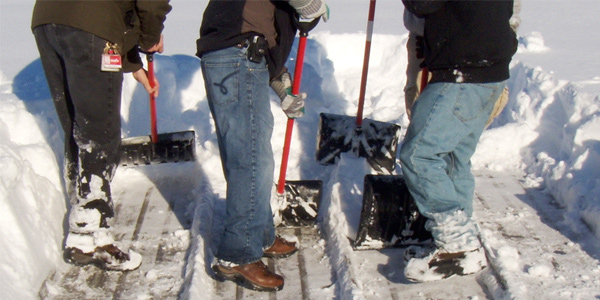 Removing snow from a roof is a challenging task. It is important to develop a safe and reliable practice for manually or automatically monitoring your roofs so action can be implemented quickly and effectively when needed.

The design snow load will not be the same for all roofs at a site, and it may even change for various sections of an individual roof. Areas where a roof is exposed to drifting snow should possess higher design snow loads.

Drifting snow can be caused by features such as:

In estimating the actual roof snow load, a method that is accurate and avoids the safety issues associated with a person being on the roof is an approach proposed by the National Weather Service.1 This alternative involves collecting a core sample of the roof snow from any accessible point. This may be near a roof access door, hatch, window, fixed ladder or other safe means of approaching the roof area. See the annex on the RiskTopics document (available for download below) for guidance on this recommended approach to estimating roof snow loads.

(Note: A frequently mentioned approach to determining the actual roof snow load is to collect and weigh all snow from a one square-foot area of the roof. This approach often involves a person going onto the roof to remove a heavy sample of snow to determine if the roof is safe. An obvious concern is the unknown exposure to the person collecting the sample.)

Consider other roof load factors. The design load for a roof will be a combination of the dead load (weight of the building materials and fixed equipment), live loads (loads due to workers, tools and equipment on the roof), wind loads and snow loads. All of these loads, except the snow load, can be present year-round.

Changes to roof loads during warm weather can lead to a surprise during a future cold-weather snow event. Any change that increases the dead load will reduce the available snow-load capacity. Dead loads can increase by re-covering a roof without removing the old roof cover. Likewise, dead loads can be increased by adding new fixed equipment on a roof or suspending new fixed equipment inside from a roof.

Changes can also occur that affect the amount of snow that accumulates on a roof. The addition of an attached or nearby building with a taller roof could lead to uncompensated increases in snow loads due to drifting on the lower existing roof. This addition of a taller building should include a re-evaluation of the snow-load capacity of the existing building.

The change management plan for roofs should include a review by a structural engineer to guide any needed structural upgrades. Without careful management of change, when snow arrives, the available snow-load capacity may not be adequate to accommodate the anticipated snow event.

Decide on course of action. A variety of audible and visual signs may be present that indicate a safe roof snow load has been exceeded. If any indicators are present, one should assume the roof is unsafe and subject to failure. Immediately evacuate the building.

Secure the services of a structural engineer to evaluate the integrity of the building before allowing personnel on or under the roof. These visual and audible indicators include:

Removing snow from a roof is an arduous task. To handle the task safely requires reasonable work conditions and careful attention to safety. It is important to understand that snow removal is not considered safe and is not recommended during a snowstorm.

Once a snowstorm is over and the building is not showing adverse visual or audible indications that a safe snow load has been exceeded, it is time to evaluate the need to take action. Is there a need to implement a roof snow-removal plan?

Deciding to initiate a roof snow-removal plan requires careful consideration. Compare the roof design snow load to the actual roof snow load. If the actual snow load exceeds the design snow load, one should assume the roof is unsafe and subject to failure. Again, refer to the annex available on the RiskTopics document below for guidance on a recommended approach to estimating roof snow loads. If the roof is unsafe, follow the steps mentioned above, including evacuation of the building and having a structural engineer evaluate the building.

If there are no adverse visual and audible indicators and the estimated snow load does not exceed the design snow load, evaluate if there is a need to remove snow from the roof.

First, when it is safe to access the roof following a snowstorm, clear rooftop drain inlets and outlets. Clear drains will help remove water from melting snow. Clogged drains can lead to severe ice accumulation. This can contribute to roof failures during a later snow or rain event.

Second, if the estimated roof snow load is approaching the roof design snow load, it is important to take proactive steps to safeguard critical assets and operation through snow removal.

Third, roof areas that accumulate drifting snow may warrant action to remove snow in the drift-exposed areas. The deeper drifts will take more time to melt and drain away. This increases the likelihood that another snow or rain event can add to the actual roof snow load in these drift-exposed areas.

Unless there are personnel on staff with experience to safely remove snow from a roof, one should secure the services of a qualified contractor to implement a safe work plan. This is a job for those with experience working safely at significant elevations above ground. It is further recommended to review detailed safety rule regulations with all contractors and secure contractor signatures indicating they have received this training.

Safely removing snow from a roof is also an expensive undertaking. Therefore, if you will be periodically faced with making a decision whether or not to clear snow from a roof, it may be cost-effective to consider a roof-deflection monitoring system that can alert you when action is needed. Examples of companies that can provide roof-deflection monitoring systems include Safe Roof Systems and Sensing Systems Corporation. It is essential to evaluate available systems against the criteria of your particular situation.

There are several conditions that can increase the need for clearing snow from a roof. They include:

When to initiate a roof snow removal plan